It’s a case of god’s will going bad. Anyone think this guy deserved his fate?

Medicynical Note: His talibaneque beliefs lead to his downfall. From the time of Copernicus and Galileo religious believers have battled scientific facts and advances. But the world is not flat, Darwin was right, and yes, vaccines work. Repent ye true believers.

Medicynical Note: Ted Cruz’s mind is a little like an empty room–nothing at all useful there. Remember Ted became a Trump loyalist even after Trump criticized his “deeply” held religious beliefs; his wife’s looks; his qualifications to run for office (birther-ed him); and even called Cruz a liar who had done nothing for Texas. Now Cruz a Texas politico who knows nothing and hold nothing sacred has the nerve to criticize Australian COVID rules.

And guess what, the Australians are not having it:

Liability and Covid…..who bears the costs

I read three articles this morning that raised concerns about liability and COVID. It’s inevitable in a litigious society that this will become an issue.

The first article concerned a State Trooper who died from COVID. It was disclosed that he had not received a COVID vaccination but was at work until he became ill. Who would be liable if they developed COVID after exposure to this guy?

The second article involved public employees in Washington State resisting the mandate for vaccination. Who would be liable if they were allowed to resist the mandate and infected colleagues or others who they met in the course of their work?

The third article points out that the vaccine mandate is working. The vaccine proved to be safe is assuring vital institutions a protected work force going into the third winter of the epidemic. And perhaps more vitally it limits their risk of facing suits regarding negligence if a person was thought to have acquired COVID in a hospital setting.

Medicynical Note: There are strong arguments for vaccination. It is safe and appears to offer almost complete protection against fatal COVID infections. Breakthroughs cases appear to be in the immunocompromised and the debilitated elderly.

With a safe and effective intervention it could be posited that an employer was negligent and liable in allowing customers (patient or other workplace contacts) to be exposed to a sometimes fatal disease. The mandates protect more than the vulnerable individuals, they protect their employers and their contacts.

In a related thought, the insurance industry denies or charges more for insurance coverage for people at increased risk. Perhaps as an another incentive to vaccinate, private and government insurers should provide only limited medical cost coverage to those refusing to protect themselves. As my conservative friends point out there are consequences to bad behavior.

I’ve been following the COVID epidemic watching as the death toll rose from zero in January to over 290,000 today. For perspective these are the U.S. deaths in WWII.

Medicynical note: While Republican political hacks have been minimalizing and denying the impact of covid, the deaths have inexorably risen. Today they will exceed the U.S. battle deaths in WWII (291,557). This was an unbelievable (till now) failure of government. The focus of Trump was almost solely on money, not citizens. Billionaires have done well while wage earners were exposed to the virus and many have died.

Trump denied, obstructed, provided misinformation and largely ignored the deaths and suffering. He’s soon to be gone while the aftereffects of his gross incompetence will linger on.

More deaths than in WWII, unF#@kingbelievable.

“Ahead of a vaccine, ensuring customers understand the latest testing requirements to travel is vital to building consumer confidence and the CommonPass solution is an important step towards offering a common international standard,” Corneel Koster, chief customer and operating officer of Virgin Atlantic, said in a statement.”

“We expect governments to move with urgency towards aligned testing standards and in parallel, to implement a robust pre-departure testing regime that supports international travel, safely replaces quarantine as soon as possible and enables the skies to reopen at scale.”

Medicynical note: We used to carry a yellow proof of vaccination booklet when traveling, particularly in places where infectious diseases were rampant. As our knowledge of vaccinations and treatments improved that requirement slowly disappeared except for yellow fever vaccination for travel between endemic countries.

The yellow fever requirement is based on WHO recommendations:

“To prevent the international spread of the disease by protecting countries from the risk of importing or spreading the yellow fever virus. These are requirements established by the country.
The countries that require proof of vaccination are those where the disease may or may not occur and where the mosquito vector and potential non-human primate hosts of yellow fever are present. Any importation of the virus into such countries by infected travellers could result in its propagation and establishment, leading to a permanent risk of infection for the human population. Proof of vaccination is often required for travellers arriving from countries with risk of yellow fever transmission and sometimes for travellers in transit through such countries.”

“Countries requiring yellow fever vaccination for entry do so in accordance with the International Health Regulations. Country requirements are subject to change at any time. Updates can be found at: http://www.who.int/ith.&#8221;

Without doubt proof of vaccination and/ immunity to COVID will soon be required for travel.

Mad magazine could not have satirized libertarian/Republican hypocrisy better. Its just American Exceptionalism….again and again. Approaching 250,000 dead and these people wants more.

And the so-called Hoover Institution……..awaiting this guy’s dismissal.

The COVID pandemic is raging in the U.S. and Trump thinks he handled it perfectly. His low standards is literally killing us.

Medicynical Note: Benign neglect is Trump’s approach and it has resulted in thousands of deaths. His fear of failure, his remarkably short attention span and his obvious intellectual shortcomings have contributed to the fiasco.

Trump and the WHO: BBC Fact Check

Trump seeks to blame somebody……anybody will do.

“The WHO failed to adequately obtain, vet and share information in a timely and transparent fashion.”

“This has become a regular theme of Mr Trump’s criticism of the WHO, and in his letter to its head Dr Tedros Adhanom Ghebreyesus on 18 May, he renewed this attack saying the WHO “consistently ignored credible reports of the virus spreading in Wuhan in early December 2019 or even earlier”.”

“The editor of the Lancet, Richard Horton, has written a letter in response, saying: “The Lancet did not publish any report in early December 2019 about a virus spreading in Wuhan. The first reports we published were from Chinese scientists on Jan 24, 2020.””

Read the rest of the article……

Medicynical note:  The article exposes Trump’s unwillingness to accept facts and disarms his accusations against the W.H.O.  Trump denied the seriousness of the epidemic all the way into March.  He blew off intelligence briefings in December; reports of cases and spread in January; and the possibility of a pandemic into March.  As late as February 24 he fired a prominent CDC expert for raising the alarm about covid-19 disease spread.

And when he did his only “early” intervention, the stoppage of flights from China, he did not stop the entry of 40,000 or so U.S. travelers from China.  They received no serious screening on return and were forced to mingle in huge crowds at U.S. customs and immigration.  Trump also did little to nothing to stop the travel of infected citizens from Europe.  And as the W.H.O. predicted this type intervention is not particularly effective…..to whit we have the worst epidemic in the world in the U.S.

His vendetta against W.H.O. reminds me a little of the Korean era when the Russians dropped out of active participation in the U.N. and in doing so allowed the U.S. to put together an international force to oppose North Korea in the Korean conflict. They couldn’t veto an action when they weren’t present.

Abdication means loss of influence, not only in the W.H.O. but in all international multinational bodies.  If loss of influence around the world was Trump’s goal.  He’s succeeded.  Thanks to him, we, the U.S., are perceived as a declining power run by an ignoramus.  Congrats to us.

Relief for Corporations, of Course. People? Let Them Eat Cake

Our feckless president and his Republican Party controlled Senate propose using tax funds to rescue corporations and fashions a rescue that cuts out the lowest earners from financial support. It gets even worse..

“But he also injected new uncertainty into the government’s response, suggesting it was not his responsibility to meet the needs of health care workers on the front lines of combating the disease. A day after he said he would use the Defense Production Act — a Korean War-era law that allows presidents to force American industry to ramp up production of critical equipment and supplies — Mr. Trump told reporters that he would rather rely on states to deliver equipment to health care workers.” (Emphasis medicynic)

“On Capitol Hill, Republicans presented a bill that would offer bridge loans of up to $10 million each to small businesses, extend hundreds of billions of dollars in loans to large corporations in distressed industries and send checks as large as $1,200 per adult to individuals earning less than $99,000 per year. The payments would phase in for earners up to $75,000 — meaning lower earners would get smaller checks — and then phase out again at $99,000. Those who did not earn enough to pay income tax would receive much less: $600.”

“The Senate bill also includes a raft of temporary changes to the tax code that would reduce the tax liability of large corporations, many of them overriding provisions in the 2017 tax overhaul that were meant to raise revenue to offset corporate rate cuts.”

Medicynical note: Where to start. In the chaos of the Trump administration we learn that our leader doesn’t think it his responsibility to assure access to competent care and testing. Where I live the PeaceHealth hospital (a several state multi hospital organization ) is reporting shortages of all types of medical materials as well as test kits. The staff feels extremely vulnerable because of the lack of preparation. This is a microcosm of the nationwide situation. Remember Trump gutted the government’s ability to anticipate and plan for a pandemic after his election. What’s happening was predicted but our guy knew better (sic) he is reaping at the expense of citizens lives and fortunes what he has sowed.

The Senate plan pointedly gives little financial support to the poorest in our society while proposing yet another large tax cut for corporations. The last tax cut, you recall doubled, the federal deficit. Trump, meanwhile, says he’s going to cut social security Medicare and Medicaid because of the large government deficits from his tax cuts to corporations and wealthy. Chutzpah combined with chaos.

So corporations under Trump receive bailouts from tax payer funds from which they want to be excused from paying. While in effect taxing the sick and elderly by cutting their Social Security and access to health care. America, something terrible is happening and his name is……..Trump.

Read Between the lines (Trump vs the Science….again)

Today Anthony Fauci of the NIH said the following about the Coronavirus regarding recommendations to the elderly chronicaly ill.

“You don’t want to go to war with a president,” he said. “But you got to walk the fine balance of making sure you continue to tell the truth.”

Doctor Anthony Fauci talks about staying away from political spin when addressing the American public about the risks of the coronavirus. #FNS 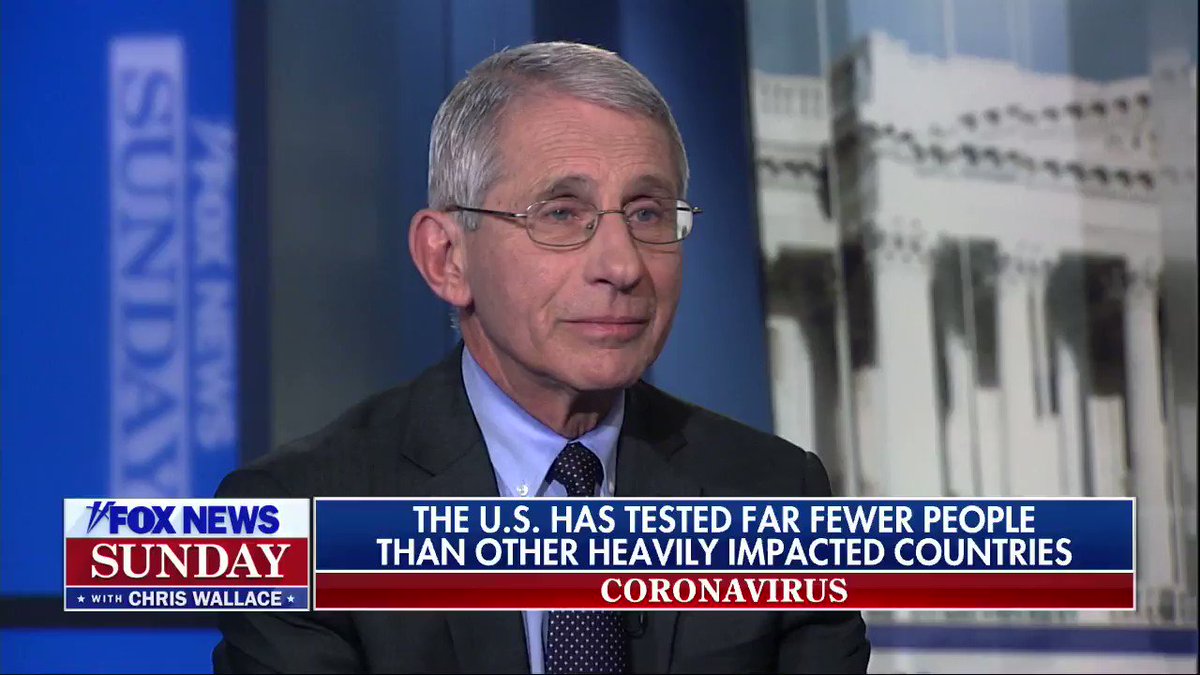 Medicynical Note:  What’s going on here?  Think there might be a conflict between the scientists and the politican?  Trump has called global warming a hoax and recently called the Coronavirus worldwide epidemic bordering on pandemic a hoax as well.  Think he has your best interests in mind?