“GIVEN THE gravity of the global pandemic, President Trump and Republicans have picked an inopportune momentto hector the World Health Organization, a United Nations agency, by threatening a loss of funding from the United States. The WHO has made mistakes in this outbreak and others, but it has also provided valuable guidance, resources and action. Mr. Trump and his GOP pals are looking for scapegoats to distract attention from the administration’s bungling.”

“At a White House briefing, Mr. Trump declared, “We’re going to put a hold on money spent to the WHO. We’re going to put a very powerful hold on it.” Then he said, “We’re going to look at it.” He said on Twitter, “The W.H.O. really blew it. For some reason, funded largely by the United States, yet very China centric. We will be giving that a good look.” Senate Foreign Relations Committee Chairman James E. Risch (R-Idaho) declared the WHO “has become a political puppet of the Chinese government” and called for an investigation.” 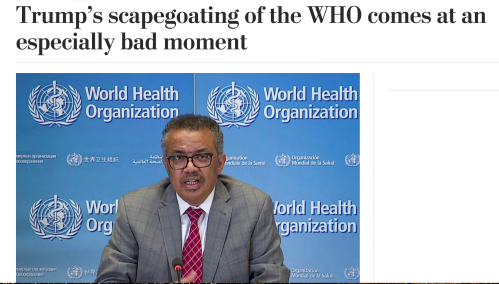 Medicynical Note:  Having gutted the U.S. Government’s pandemic early recognition capabilities in the NSC and CDC and it’s embedded staff with the Chinese CDC,  Mr. Trump is blaming the WHO for slow recognition of the epidemic in China.  He spins it as WHO is somehow favoring China.  It’s no great surprise that it was the Taiwanese who decided that this was the way to spin this issue.

In fact the WHO was on the epidemic and calling attention to it while Trump was calling it a media hoax; saying it would go away like a miracle; and that it would disappear in April.  Never in history has a President been so wrong about something as obvious as a spreading epidemic.  He ignored his own health experts as well.

And yes, his response to the epidemic has been slow rolling disaster.  Who is responsible?  Not Trump. He has famously declared he was not responsible at all for the testing failure.  He designated Pence to, ostensibly, be in charge of the government’s response  and then within two weeks allowed the creation of two or three (no one really knows) other task forces,  none of which has ultimate authority.  That seemingly rests on the whim of you know who.  It’s apparent that Trump is torn, he doesn’t think it’s the Federal Government’s job to protect it’s citizens from a pandemic saying at times it the state’s problem but at other times is driven to inappropriately intervene.

So we have 50 states scurrying helter skelter trying to figure out how best to get supplies and shelter their citizens.   They find themselves in a competition with the several U.S. task forces for equipment and receive almost daily conflicting advice on how to respond.  It would be humorous if not so tragic that this man, who bankrupted 5 businesses and has been found more or less guilty of fraud in regard to his personal charity and the so-called Trump University, is in charge of the response to the largest systemic health threat in 100 years.