Happening now. Unpredictable changes some of which will be catastrophic.

“In an event that is unprecedented in 40 years of record-keeping, temperatures over Antarctica rose rapidly, causing the polar vortex over the Southern Hemisphere to break down and even reverse direction. This had cascading effects on weather patterns: The westerly winds that blow across the Southern Ocean shifted northward. Cold fronts moved across Australia, bringing intense wind but little rain.”

“By turning forests that once absorbed carbon into flaming carbon sources, the wildfires are contributing to the very problem that makes them more likely. Satellite observations suggest that emissions from the fires may be on par with what Australia produces annually by burning fossil fuels.” 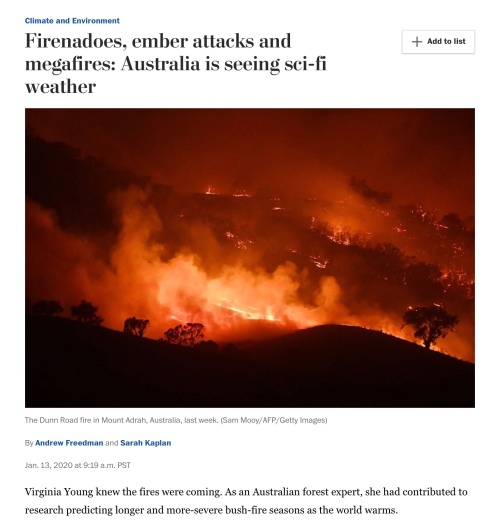 Medicynical note: Meanwhile the President of the largest economy in the world is unable to see past the short term. He thinks global warming from man’s activities is a hoax–he and his cabinet are under the financial influence of the oil and coal industry.

Whatever the long term consequences of his environmental heresy, his financial foolishness, his destruction of health care, his undermining of racial and social equality and his promotion of religious fundamentalism, at age 72 he seems to figure either that either through his supporters buying into his destructive policies and his limited lifespan he won’t be around to accept and to be held responsible. Our ruin will be his legacy.