“About 43 million Americans have unpaid medical debt dinging their credit, and half of all overdue debt on Americans’ credit reports is from medical expenses, according to a Consumer Financial Protection Bureau study from 2014. The debt typically comes from out-of-network doctors who people thought were in-network, hospital stays, or ambulance rides. About one in six Americans received a surprise out-of-network medical bill in 2017 after being treated in a hospital, even though they had insurance, according to Kaiser Health News.” 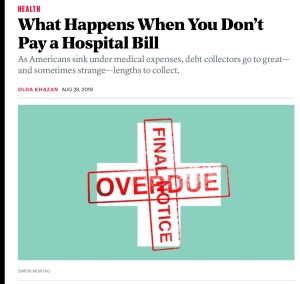 Medicynical note: And when the bill the patient directly, hospitals seek payment of the full ” list” price not the dramatically reduced price negotiated by insurers. For example I recent saw a bill for about $25,000 paid off by the insurer for about $12,000. The patient however if uninsured would be responsible for the unreduced amount. At every turn health care in the US is more about money than care.