“He more than any single living person is responsible for the GOP’s cowardly betrayal of its historic commitment to fiscal rectitude,” former Reagan budget director David Stockman told NPR via email. He lambasted Laffer as “the greatest Fake Economist to ever come down the pike.” 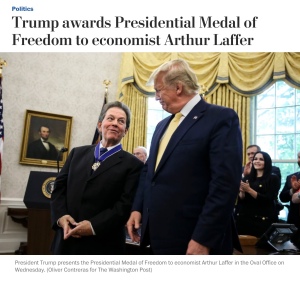 Medicynical note: The president whose administration is running the highest deficit ever during a so-called “best economy ever” (sic) awards the highest civilian medal to the failed economist who made it all possible. Stupidity on display is truly America Exceptionalism at its worst.