Overcharging is the rule in the U.S. 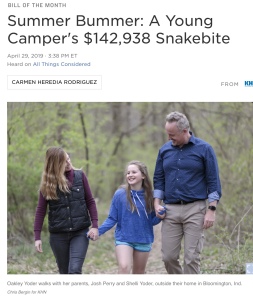 The average list price for CroFab is $3,198 per vial, according to the health care information tech company Connecture. Manufacturing costs, product improvements and research all factor into the drug’s price, said Chris Sampson, spokesman for BTG. ”

“A Mexican version of snake antivenin can cost roughly $200. But it couldn’t be sold in the U.S. (More about that in a moment.)”

“In Oakley’s case, St. Vincent Evansville hospital charged $16,989.25 for each unit of CroFab, according to the facility’s bill. That’s more than five times higher than the average list price.”

Read the article for more.

Medicynical note: The U.S. overcharging for healthcare services seems to be more the rule rather than the exception, particularly for those in life threatening situations. If the patient is insured they will most often get a significant discount rate that cuts the bill dramatically. Ironically if a person has no insurance, hospitals and other providers bill the full amount…… to the most vulnerable patients

This entry was posted in Ethics, General Cynicism, Health Economics. Bookmark the permalink.