Health Care for all–errr, for all who can afford it

Employer based insurance is failing. It doesn’t work for employers, many of whom can’t afford to provide coverage, particularly those with lower income employees. And it doesn’t work for the employee who either has no insurance or has to spend a significant proportion of income to buy coverage.

To understand the magnitude of costs relative to income: 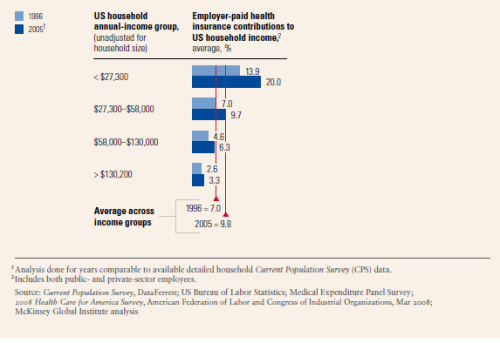 Meanwhile Ramesh Ponnunu (of the National Review) in an OP-ED, advocated a move away from employer provided health insurance. Medicynical note: Can’t argue with that as I believe the employer based insurance system has failed.

His approach, however, would allow employers to drop health insurance and provide a tax credit to the employee to buy insurance on the private, individual market. He argued that this will bring market forces to bear on health care costs.

His tax credits, as I understand it, will provide a decrease in the amount of taxes paid. But it won’t provide relief for a significant part of our population. For example, families and individuals with $27,000 or less income have no tax liability (see here).

We can do better than this.

This entry was posted in General Cynicism, Health Economics. Bookmark the permalink.