Today’s NY Times has an article on medical tourism.

It reports on a patient who went to Costa Rica for double hernia surgery. The financials on his decision were as follows:

“No longer covered under his former employer’s insurance and too young to qualify for Medicare , Mr. Schreiner has a private health insurance policy with a steep $10,000 deductible. Not wanting to spend all of that on the $14,000 his operation would have cost stateside, he paid only $3,900 in hospital and doctor’s bills in Costa Rica.” Medicynical note: Plus airfare and accommodations.

Proponents of Health Savings Accounts often use the medical tourist to illustrate that the market can work in health care and to promote the notion of HSAs as a fix for our dysfunctional health care system.

For whom does a high deductible health insurance product work?

Who in our culture can afford a $10,000 deductible? If this wealthy retired bank executive didn’t want to pay it, how will those families earning less than the median income manage? 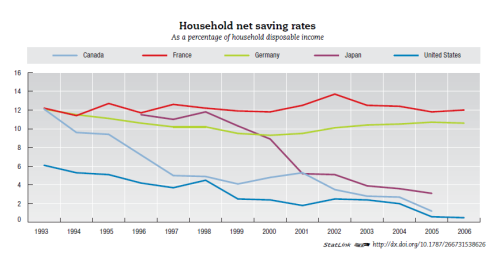 HSA proponents postulate that if used over many years the savings aspect of the HSA would be able to cover the deductible. In the real world however, half or more of our population do not have the discretionary income to put such money away–check out the rate of savings (see above) in the U.S. over the last 15 years. Furthermore, have look at the costs of care in the U.S. system. How long will savings in an HSA last in any significant illness? How will the savings needed for an HSA affect retirement savings of families living with incomes below the median ($50,000/year)?

HSA’s are designed to finesse the system, they are marketed heavily by various conservative organizations and insurers who believe free markets work in health care–no evidence anywhere in the world that this is so. Why do insurers like HSAs? Because HSA’s offer an opportunity to segment the health care market and skim off the lowest risk customers. HSA’s, with high deductibles and lower premiums, attract the young who are a low risk of illness, the healthy who do not expect to be sick and the wealthy for whom out of pocket expenses are not a problem.

However for the health care system as whole, for those who are chronically ill and those without money, HSAs are a dead end that create more problems than they solve. Consider the patients seen at a free clinic, as described in this LA Times article. They’re not quite as chirpy and self satisfied. They are stuck in a non-system of care that doesn’t work for them. HSA’s are not a consideration for them.

Care to guess who ultimately pays? We can do better.

This entry was posted in General Cynicism, Health Economics. Bookmark the permalink.